Malda in its attempts to achieve a remarkable breakthrough in Mission Nirmal Bangla Programme (MMB), has worked very hard. The primary intervention of covering toilet less households was based upon the Base Line Survey data of 2012. As per BLS 2012, the total number of households in the district was 4,14,257. At that time only 1,09,724 families were using toilets and thereby more than 73.51% people of this district were openly defecating. During this time Rural Sanitary Marts were constructing toilets for individual household latrine (IHHL) in the district. In an effort to provide toilet to the households, they were seen the main stakeholders taking a lead in constructing their toilets. The District Administration and Sanitation Team observed that there has been a remarkable progress in defecation pattern and as a result, on 21st November, 2019, Malda district was declared as ‘Open Defecation Free’ in front of the Hon’ble MIC, P&RD Department, the Commissioner, MGNREGS and others dignitaries.

After the completion of target from the Base Line Survey 2012, Panchayat & Rural Development Department, Govt of West Bengal has given a provision to build additional individual household latrine (IHHL) of those left out / new Households throughout the district. First, there is Left-Out Baseline (LOB) category. In this category, the district has given 13367 Nos. IHHL and as on date out of that target, 11711 Nos. IHHL have been constructed and geo tagged and rest 1656 Nos. are under construction. And second category is No one Left out Baseline (NLOB). The target is 3876 nos. and out of that 1802 has already been constructed and geo tagged and rest are under construction. Other than IHHL, the District Sanitation Cell has planned the following category for this financial year 2020-21 using the fund of SBM / MNB-Rural and 15th Finance Commission in converging mode among the targeted Gram Panchayats : 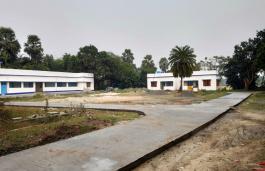